Norwell is a quaint suburban town south of Boston made up of country roads, cul-de-sacs, old and new subdivisions.

Norwell streets and neighborhoods all begin with Main Street (Route 123), which begins at the Hanover line at Jacobs Pond and third herring brook heading east straight through Norwell center to the Scituate line.

Norwell’s main business corridor (Route 53) also known as Washington Street runs from Assinippi corner in Hanover to Queen Anne’s corner in Hingham. This stretch of roadway features some nice restaurants, small shops and retailers, large grocery stores, medical and professional offices. Route 53 runs parallel with Route 3, which you can easily access from Route 228 near the Norwell/Rockland town line, which is exit 14 or you can access it at the Hanover exit 13 on-ramp.

Without any traffic, you can shoot down Route 3 South to the Bourne and Sagamore Bridges to Cape Cod in about 30 minutes and North to downtown Boston in about the same time. Rush hour travel times to Boston can vary, but can be long during certain hours, days and times of the year. I would recommend avoiding peak travel times or use the commuter rail stations in Scituate, Cohasset, Hingham or Weymouth or take the Ferry boat out of the Hingham shipyard to travel stress-free to Boston.

Norwell has two commercial office/industrial parks, which makes up about 15% of the town’s tax basis

Norwell has two industrial and office parks, Accord Office Park on Accord Pond Drive and Assinippi Office Park on Longwater Drive. Norwell is home to some well known Corporations such as Clean Harbors, Zildjian Cymbals, and Sullivan Tire as well as the award winning Company Theatre, South Shore Medical Center and the South Shore Charter School. 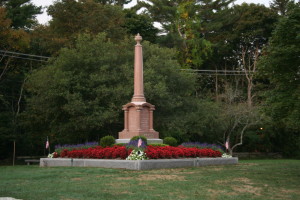 The Center of Norwell meets at Main, Central and River Streets at the Norwell Town Common where the tall red granite Civil War Memorial prominently stands, across from Cushing Memorial Hall and the Jacobs Library. There is also another beautiful granite Veteran’s Memorial Wall there remembering all the Norwell residents who have fought in World Wars and conflicts that gave the ultimate sacrifice.

Here’s a helpful Norwell Streets and Neighborhood directory: (If you click on the Street, it will link to a Google Map, where you can choose Earth view, Map view or Street view)

High Street, Norwell Streets and Neighborhoods (West side of Norwell near Route 53)

Main Street, Norwell Streets and Neighborhoods (East side of Norwell Center toward Scituate)